Super Saturday and the repatriation flights ...

Super Saturday, when the Ryanair fleet came to visit ...

The airport has had one Ryanair aircraft land, in its lifetime, then we get four in seven hours for Operation Matterhorn. 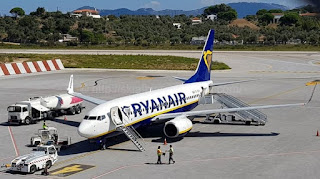 Clearly, the Ryanair crews were excited about their visit. I watched them taking photos of the aircraft. Then with the crew, photos with the groundcrew, quite an event.


The Ryanair is smaller than the TC's so not enough room for everybody. Its not just a problem for them, all the aircraft sent so far - except the two ex TC's on Friday cannot take everyone.

This being the 'new last week' of the season, the flights are full going back. So yesterday the East Midlands took the overspill, from the Gatwick and Newcastle flights.

Later the Manchester flight left some folks at the Skiathos Palace for another night. For some reason the thought of a night in the Palace, rather than Manchester was not appealing ...

The Manchester flight today, it's details are still to be posted, (Will update when details are confirmed) If you were not on the one yesterday, you probably will be put on the one today. I would take another night in the Palace, even a garden no view room, but that is me ...

The aircraft for the Gatwick trip, for sure will not be big enough, to return all the customers. Its an MD83 from the museum, a piece of aviation history. Its been here before so around 20 will stay from that one. The airlift is working, It's just the short runway stops them sending a bigger aircraft.

By tonight over 2000 passengers will have returned to the UK, on the minus side the island is missing 2000 paying customers enjoying their holidays. Many of whom have gone elsewhere.

A lot of people are in shock here, with what happened. People are panicking about next year's holidays, on the groups and forums, and TC only went under six days ago.

Owners have no idea, who they will be dealing with, let alone what aircraft will come.

It's early days, someone will step in, there will be planes and holidays. Just nothing will be sorted for a while yet ...

Yes do panic,  if you are waiting for the Ryanair to Manchester - Grab your toothbrush, you are off to the Palace ... 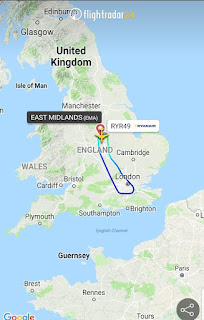 Your aircraft has returned to base, Its gone tech ...

Comments are restricted to users with Google Accounts on this site

The webcam at Pizza Panorama Skiathos, providing a panoramic view of your favorite island 24/7. The webcam uploads a new image every 20 seconds and you can watch it by following this link: http://meteo.camera/skiathos/