... in the vegetable garden, feeding and watering, weeding and tidying.

Removing the dead and dying unhealthy leaves. Pulling the weeds, and adding them to the growing heap that will become the autumn bonfire.

TBH it has been a good while since I had a proper morning in the garden, and I do love it, despite the fact that I often come in battered and bruised and scratched. Looking back at it now I’m not sure I can see exactly what I’ve accomplished today, but it looks fine for now, but in a few days the weeds will strike back.

This little vegetable garden has been good to me and delivered the goods despite at times issues with water, and almost constant high temperatures, and with little shade.

No need for irrigation as the sweat was dripping like a running tap, in a sauna.

The fruits of my Skiathos summer ... 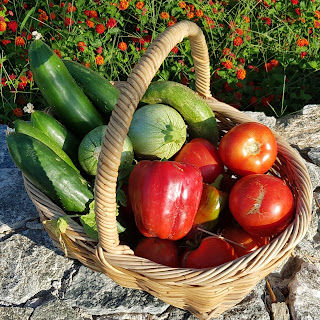 Aubergines: Slow to produce, but cropped well and have overdosed on them baked with tomatoes and mozzarella cheese.

Beetroot: Lost most of these due to a sheep visiting, some remain but have planted more for autumn.

Celery: Suffered from the lack of water,  and being in the process of going to seed. Will need to see how it comes back in autumn, but looks promising.

Cucumbers: Prolific growth, heavy croper. They grow quickly and can grow too big between visits. Too big they become bitter and seeds need to be removed, and dried for another summer.

Coriander: Hard to establish in the heat but we had some and perhaps an autumn supply to come.

Parsley: Had gone to seed - stored for another crop. Had to cut it back hard to save the bed. We shall see if it comes back after the lack of water. For now there are green shoots springing up everywhere.

Peppers: Bell peppers were slow to produce, they do not like the soil, to produce again will need a lot of preparation work. Romano peppers were good, but took forever to ripen, probably the same issues as above.

Radishes: These grow well, fiery and can grow too big very quickly. A great favourite of SWMBO in a salad and grated in olive oil to reduce the heat

Red Onions: Not as many as I would have liked but we have a crop.

Rocket: The sheep found them very much to their liking too, but some came back and were enjoyed.

Salads: Too hot so lost in the weeds which grow faster. Try again in autumn

Spinach: Like the salads it suffered with the heat, but in a shaded position it grew well. We had a meal or two out of it where the salad failed.

Spring Onions: They did very well, some will be nice sized onions for a cheese roll and a beer.

Tomatoes: Beef type: Were excellent as long as they had good water supplies, fell victim of the wind on the plot. Standard type bolted in the heat, but have delivered the goods.

Have to say the tomatoes have been excellent, so sweet and tasty and I do not get tired of eating them every day, Even enough to make great sauces, and a few litres of soup for winter - if it lasts that long in the freezer ...

Zucchini:  I had the wrong type, which grew to five a side footballs, we sliced them, fried them, baked them, but best when small and sweet, no larger than a golf ball. I have dried them as garden ornaments, like small pumpkins, might come in handy at halloween ...

Comments are restricted to users with Google Accounts on this site