Tries Hieraches or The Three Patriachs ...

Today is the celebration day of the main church in town ... 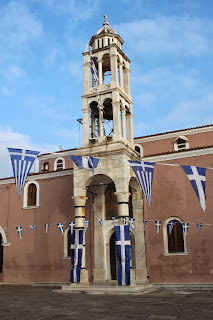 If you did not know, then at 6:30am, you would have received a wake up call, with the call to church, on the cathedral bells.

The Three Hierachs or three patriarchs, were the great teachers of the church:

As its the name day of the teachers, its also a school holiday here on the island ...

A rare celestial event will grace the skies during the coming week when a blue moon and lunar eclipse combine with the moon being at its closest point to Earth, resulting in what is being called a “super blue blood moon”.

The trifecta will take place on 31 January and will be best visible from the western hemisphere. The last time the three elements combined at the same time was in 1866.

A “super blue blood moon” is the result of a blue moon – the second full moon in a calendar month – occurring at the same time as a super moon, when the moon is at perigee and about 14% brighter than usual, and a so-called blood moon – the moment during a lunar eclipse when the moon, in the Earth’s shadow, takes on a reddish tint ...

The other 'super moan' that takes place in January is the discussions about flight prices, the pays and the pay nots, who are going somewhere else. The reasons why and the bargains to be had or not.

Its called supply and demand, and the happy clickers forcing up the prices ...

Later Update:
Delighted to have made the 'Sunday People'  with one of my quotes on their Skiathos page today.'Skiathos is nicknamed the Boomerang island, once you visit you keep coming back'
If you were a member of the 'Original' Boomerang club, that was what I had as the header at the top of the respective section on the Bulletin board forum around 1999/2000.
Posted by Skiathian at 10:18 3 comments:

So it seems the AQUA Myrtidiotissa car ferry, will not operate on the Sporades routes this year, The car ferry operated daily from Agios Konstantinos to the islands last year ... 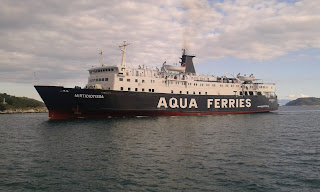 When it departs from Piraeus shortly to start operations for this summer, Its off to Kefalonia as the old chugger been sold ...

So at the moment, the only planned summertime connection from Agios Konstantinos to the islands, is Flying cat 5, on a Friday/Saturday and Sunday ...

The schedules for Flyingcat 5 have now been published on their website by Hellenic Seaways.

Late news just in - Someone has asked, 'What will the weather be like on May 18th' Answers on a crystal ball to ...

The three mayors have returned from Athens ...

On Monday the three mayors of the Sporades and the Hotel associations of Skopelos and Alonissos were in Athens. They were making representations after learning, that Flying Cat 4 this year will not be travelling between the Sporades and Thessaloniki.

A wasted and expensive journey, perhaps a conference call would have been a better option ...

Quite ironic really as Hellenic are not operating anything on the Sporades route at the moment either. The flying Cats are tucked up in Piraeus for the winter, and so is the Express Skiathos for winter maintenance.

However Hellenic are still prepared to offer free travel to the mainland for those in financial difficulty. This again being negotiated by the 'Skiathos cultural association' and well done to Teo Tzoumas for that ...

Seacats may yet step in, with a service from the Sporades to Thessaloniki, but at this stage probably unlikely in time for a service to operate in 2018

Steve in Skiathos has posted a very informative update on the development ...

'After a lot of help from a Greek journalist, I have obtained a copy of the development plan for the Xenia hotel. I have overlaid it on a couple of images from Google Earth to give some idea as to where everything will be. 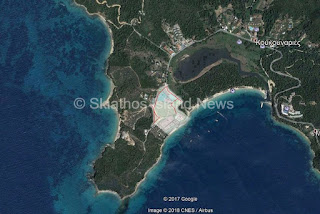 As you can see, the existing path to the top of the hill behind banana beach will disappear (shown by the red crosses) and new roads will be in place (shown in red). The paths for these new roads have already been cut. I have included the latest artist’s impression from the developers in case anyone missed it last time and it helps to show the sports facilities, green areas etc. 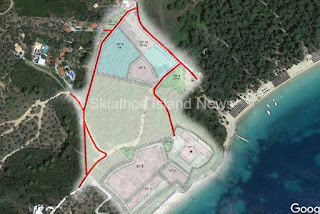 The area marked OT 4 is to be a restaurant/dining area but, as of summer 2017, the developments at OT2 (57 room complex) and OT3 (10 houses) are subject to a delay. The Central Council of Modern Monuments and the Minister of Culture are insisting on changes to the plans being made before the building licence can be issued. I am not sure if this has been resolved but there is no sign of the actual construction starting yet. The dotted areas around the buildings are footpaths rather than roads and there appears to be very little parking (the plan specifies a minimum of 80 spaces for staff, guests 7 visitors). Anyone who has been to this end of Koukounaries beach in July & August will not find it difficult to imagine the chaos that is likely due to lack of parking! 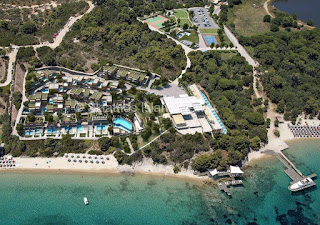 As you can see, the development behind the two banana beaches is not part of the Xenia plans and I am still trying to get similar details for that'....

Thanks to 'Steve in Skiathos' and 'Skiathos Island News' for very kindly, allowing us to share the following update, and photos of the ongoing works ...

What to do with those two bottles of FIX dark, that you tucked into the suitcase for a rainy day. Only to forget about them?

You make bread with them ...

You use the beer in place of water in the mix, with flour, yeast and salt to make a 500g loaf, and here is the end result ... 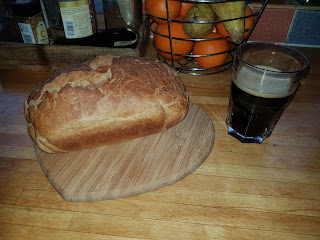 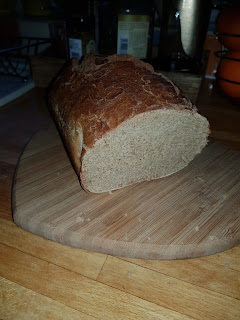 Must say the bread is delicious, like the best Hovis you have ever tasted. Whats more you get to drink what beer is left over too ...

Now what to do with that bottle of Christmas Ale - Bah Humbug ...

The Proteus ferryboat back again ... 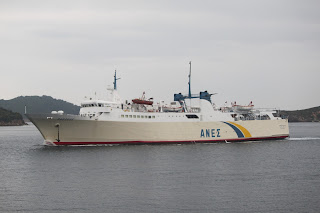 The itinerary started on Sunday the 7th of January. The boat departs from Volos daily at 8am to Skiathos Glossa, Alonissos, (and Mantoudi over on Evia on Friday and Sunday)

Express Skiathos is off to Piraeus for its winter refit ...

After two years, Thessaloniki will not be linked to the Sporades, in the summer of 2018. a negative development that is a major blow to the tourist movement of both the city and the islands.

Hellenic Seaways, has decided to relocate FlyingCat 4, which was operating from Thessaloniki's port to Skiathos, Skopelos, Alonissos, last summer to be used in another line, from the port of Rafina.

A ferry strike has been announced by the usual suspects Greek seamen federation (PNO) for 24 hours on Friday January 12 from 00:01 until 24:00. 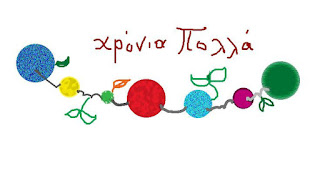 Previous Blog: Skiathos Jigsaw ...
Posted by Skiathian at 10:16 No comments:

Steve in Skiathos has a challenge for you ...

For anyone who is missing their favourite island, and who likes jigsaws try this link ...

When the window opens read the instructions on screen

If it proves fairly popular Steve will put a new one up each week ... 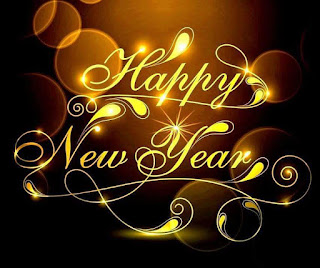 You celebrate the start of the new year with Kalo Podariko - Getting the year off on the right foot ...

That done, Once indoors we cut the Vasilopita cake ... 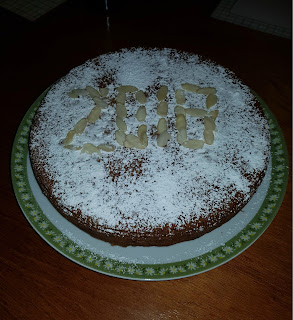 Vasilopita is the cake with which Greeks welcome the New Year.

Cutting Vasilopitta has a specific ritual that is followed with devotion. The Cake is cut either a couple of minutes right after midnight of the New Year’s Eve and in the first minutes of the New Year or next morning after the breakfast.

According to the tradition, the head of the house, usually the father, first makes the sign of cross on the cake and starts cutting piece by piece the Vasilopita, devoting each piece to each family member. However, the very first piece is always devoted to Jesus Christ, the second one to the family home, the third to him and so on ...

The one who finds the Golden coin in his or her piece, will have luck all through the year.

Therefore, before each piece is cut, one has to name first to whom the piece belongs. If guests are present, they will be called after the family members and according to age, from eldest to the youngest.

The coin is hidden in the cake dough before baking.

In older times, the coin was a golden coin, later it mutated into a normal currency coin wrapped in aluminium foil for hygienic reasons.

Later update: Still no sign of the magic coin. Junior has not located ours yet. It's just a matter of time, to find it for the third year running ...

Previous Blog: Changes from tomorrow ...
Posted by Skiathian at 02:47 No comments:

The webcam at Pizza Panorama Skiathos, providing a panoramic view of your favorite island 24/7. The webcam uploads a new image every 20 seconds and you can watch it by following this link: http://meteo.camera/skiathos/