The main event will be on Sunday at 11am, on the Old Harbour ... 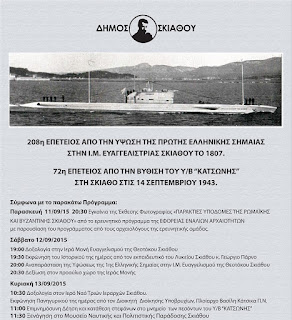 Posted by Skiathian at 15:32 No comments:

Collapsing the Monastery of Kechria Skiathos ...

Monument every sample of human activity from previous seasons showing special interest and are worthy to be preserved. In the case of the Monastery Panagia Kechria Skiathos (monument), or should we change the interpretation of the monument word, if you need to follow, or cease to be called a monument because the image abandonment, shows that it has been decided that it is not worthy be maintained.
The Kechria Panagia monastery is classified as a historical monument by the Ministry of Culture in the Government Gazette 644 / B '/ 10.2.1965, VA 3988 / 09.21.65, and its foundation dates back to the 16th century. The only building of the monastery that was not destroyed and broadly maintained its original form is the universal, belonging to the type of single-triconch small domed temples. The church is full of a painting ensemble of the 18th century, characterized by iconographic completeness, monumentality and artistic quality. Of particular interest is the high art carved iconostasis, of the late 18th cent., Which is not the original church.
Perhaps reading these wishes can visit the monastery, and then you will be confronted with the sad reality, a "monument" to be destroyed before his eyes.
The internal coating of the wall has fallen in many places dragging and frescoes, strongly induces the look a piece of the wall with three "decapitated" saints, and by association led to heinous acts of jihadist beheading antiquities, not that there is certainly no match, but the result is the same, damaged monuments.
As features made the president of the Cultural Association "Skiathos" Theodore Tzoumas: "What is it that allows us inside us to endure this picture and in the end to the accustomed, Nikos Dimou, in his essay" The misery of being Greek ", writes that blame the" grid inferiority towards our ancestors, that leaves to realize their projects.
"It might seem to some former nobles who can not sustain their heritage, but really can not or simply do not concern us?
Difficult times for restoration, is perhaps one of the first thoughts, but it is actually more difficult the times that built the monument? 16th century (according to the designer of the post-Byzantine monuments of Skiathos, Mr. Alexis Alexiou).
What really respect our monuments, and especially when we consider and sanctuaries such as the Abbey Notre Kechria, connected with the rescue Memorial Day Skiathos from the ferocity of the Germans.
The responsibility lies with all of us, because this is our cultural heritage, one of the most important monasteries of the island, an island that the long history of its people, has left important monuments behind it, but we as' People of monuments, we can not "ever see" our monuments ... ', paraphrasing George Seferis.
In order to maintain the ledger to keep stands the dome of the ledger with fourteen monovola windows, where "All The sun shines in the dome of your beautiful church ...", says the vivid description of the Alexanros Papadiamantis, in his poem of "The Virgin Kechria", the Cultural Association 'Skiathos', engaged in cooperation, since last March, the Branch of Magnesia of the Technical Chamber of Greece and Archaeological Magnesia, with the permission of the Abbot of the Monastery of the Annunciation, Fr. . Joseph, for the preparation of the ledger maintenance studies, the frescoes and iconostasis.
The Cultural Association 'Skiathos', would like to thank Mrs. Nancy Kabul, President of the Regional Department of Magnesia of the Technical Chamber of Greece and Ms. Anna Gialouri Head, Department of Byzantine Archaeological Sites of Antiquities Magnesia on cooperation and the immediate response.
In this effort, any help is welcome. "
Posted by Skiathian at 14:55 1 comment: