The sun is up the sky is blue ...
After two days of rain what will we do ? Answers on a postcard to ...
The weather has interrupted preparations for Pasca, the rain has stopped the exterior cleaning and tidying up. I have yet to start painting the flower pots, and oiling the shutters and cleaning the windows. When the weather is grim, you just cannot do it. We seem to have a day of sun so will try to make a start today ...
With the weather being poor, the washing needs to be dried indoors, last night the woodburner was on, so no problem. However the clothes airer decided after three years, that its time had come, and sedately collapsed. It's back broken and beyond repair. It was a graceful departure - almost comical as it folded up in front of us and snapped ...
The next comedy act will be finding something appropriate to replace it here on the island, and that will last the distance. Amazon have something that is posted here free of charge, so am off to the shops on a pricing expedition ...


Guess what ? Yes we await our forthcoming Amazon delivery :) Sunshine and blue skies, have given way to cloud. Windows and curtains cleaned and the washing machine has sprung a leak - Argh !!!!!!!!!!!!!
Posted by Skiathian at 09:19 No comments:

Its rather a wet Great Tuesday ...

Its been tipping it down all night, there was a brief interlude around 3am, However its been raining quite steadily since the early hours.
So a brief message for the rain gods in our, hour of need ... 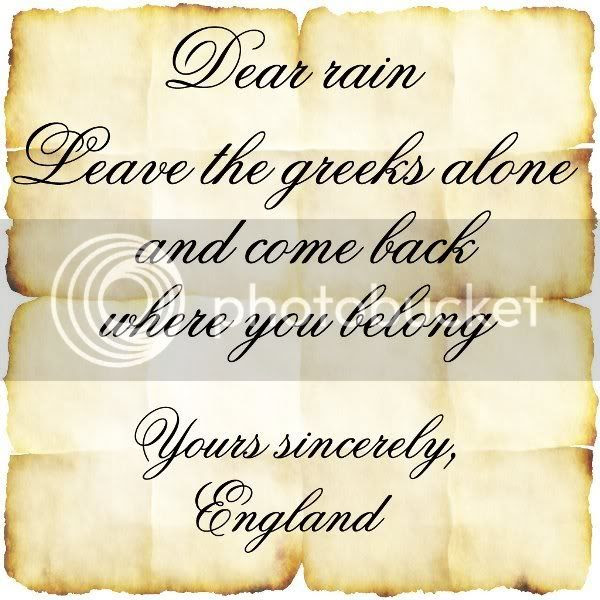 After all, some need the rain more than most ...

However the weather dipped as the morning went on - rather like me after last nights fun and games.

By lunchtime Junior and I had to retreat from the Paralia and a passing shower, as darkening skies threatened from the north. Later it started to rain, and the rain has turned into a torrent, that is battering the roof at this time.

The fire is on, and its warm and cozy, the trouble is I am battling another cold. I tried to drown it last night, and now its seeking revenge!

Heading for my pit - Goodnight from a rather wet Skiathos ...
Posted by Skiathian at 22:39 No comments:

The church was very busy, today the locals attended in great numbers, leaving the church at 10am carrying sprigs of freshly picked bay leaf to take home.

Later I went to the airport to pick up one of our distinguished readers of the blog ...

Malcolm is here for his first Pasca on the island. When I went to the airport the weather was turning darker and more chilly, he was rather pleased too habing had a ride on the ATR-72 rather than the usual DASH 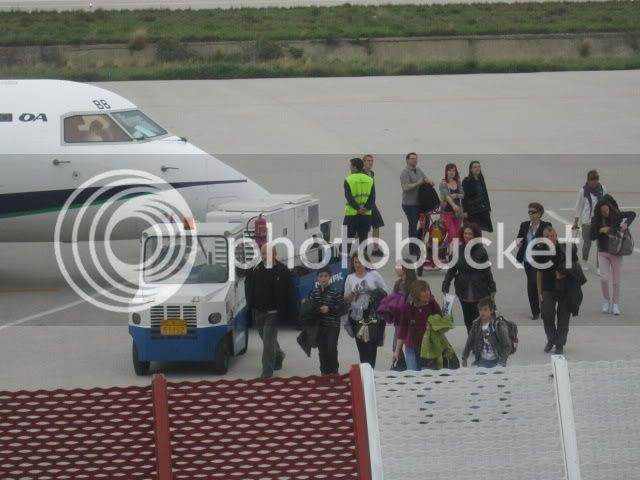 Whisked into town we passed goats grazing at the entrance to the airport - You would not get that at Heathrow Gatwick of JFK.

I noticed that the airport improvements had further trailed off, and someone appeared to have made off with the cement mixer - either that or it had dissapeared into the swamp where it had last stood.

A quick change and after ablutions he attended his welcome meeting in Taverna O'Batis.

All I can say is a good time was had by all, including a learned friend who attended - despite still shaking like a leaf from Saturdays stunning get together up in the hills.

Malcolm was sent to bed at 00:15am, after leaving Christos with some tidying up before he could go to bed too ... 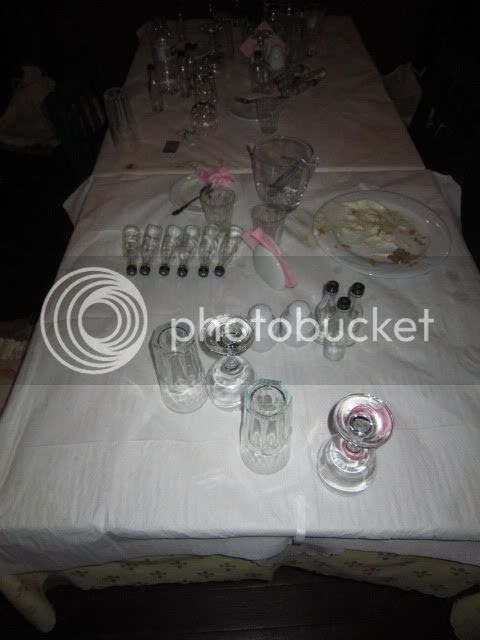 PS the meze with the tsipouro was amazing, Eleni really is one of the best chefs on the island ...
Posted by Skiathian at 23:57 No comments:

Took these photos up in the hills, at a friends lunch party today ...

Posted by Skiathian at 22:26 No comments:

At some time today, I hope my view will be somewhat like this ... 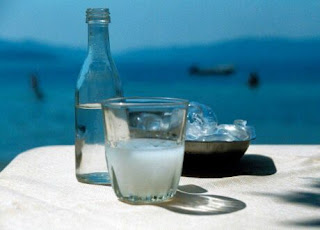 However, I think it will be somewhat like this ...

Tough life here on the rock, will report back later ...
Posted by Skiathian at 07:46 No comments:

Regular readers will know the best use is kindling for the fire ...

But what do you do, when your favourite fishing location, is left isolated by the owner of the structure ? 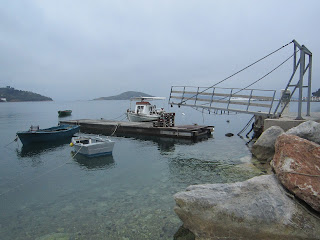 Well it takes a lot of thought, before you make the ultimate sacrifice. 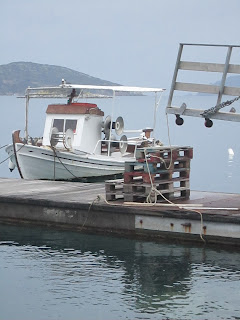 That's a clever fisherman, who came up with that idea ...
Posted by Skiathian at 10:17 No comments:

Back in the old routine ...

Pre dawn, the chill is in the air, and its quite dark ...

Just changing the clocks one hour does make a difference, however the skies are heavy and when daylight broke very grey. The hills were shrouded in cloud and the sea rather misty. No sunrise over Skopelos this morning, I feel somewhat robbed of the experience.

The spring at Taxiacharis was a torrent, Never have I filled the bottles, as quickly as I did today.


I popped in to see my friend - however the entrance to his property was fortified and secured. He has been under the weather, I assumed he was having a well deserved lay in. However, later he said it was to keep the sheep out.

I suggested he was keeping me away from his coffee pot - which we shared on many mornings over the last year ...

Back down in the indigo light, scaring away the huge crows that seem to sit in the road most mornings. Its a wonder that they do not get a free lift, like this pheasant did in this mornings DM story ...


Visiting one of the small bakeries, early in the morning, the aroma of freshly baked bread was intoxicating. Warm sesame loaf and Koulourakia laid out before me.


A “kouloura” (koo-LOU-rah) in Greek is a round twist. Often on sale as bread, The name for these traditional butter cookies comes from their round twisted shape. You will also see Koulourakia as small braids or in the shape of the letter “S.”
Koulourakia are delicious dunked in coffee or milk and are the traditional Easter cookie.
Another traditional easter bread is the raisin bread, however they are usually flat and rather biscuit like. This morning the ones on sale were puffy and light. I bought one, and it had the texture of a tea cake, and was delicious ...
One thing that is not very traditional is the weather as these photos show, from my morning walk back along the Paralia.
But every once in a while on the dawn patrol you see something new, a fishing boat heading out across a grey, mirror like sea towards Tsougria
Or Nikos from the bakery recycling his water bottles, after using the water, to make the bread, that is baking in the oven at the Tries Hieraches church square bakery.
Walking back, I took care to avoid treading on the snails, that were at this early hour making their way across the path - looking for tasty green leaves, at first light.
As I have said on here many times of late, that last ton of wood was a great investment.

On a cool evening. last night the street was perfumed with woodsmoke, as many of my neighbours are still keeping warm behind shuttered windows. April and as it is still cool, at the current rate I will use it all up ...
Posted by Skiathian at 13:38 2 comments:

... To our friends from the Hellas Blog

You too can keep up to date with their adventures in Sifnos, at Hellas Blog ...
Posted by Skiathian at 22:08 No comments:

Who has been watching ...

Time to take a look to see who has been visiting the blog in March ...
Once again the Brits are dipping their toes in the Aegean - Who can blame them, and my friends from far away - all keeping up to date with island news whilst on distant shores.

Now if your country is not listed, its because its not in the top 10, so you must try harder this month.
Better still, what about booking that trip down to the rock, many like a growing number of friends who are visiting here out of season too.
This month its absolutely beautiful here with the spring flowers all around. Pasca and the celebrations, hopefully a horse race on St Georges day, feasting and fun - before the tourist season starts once again ...
Now if you really want to help Greece, then its nearly time to pay us a visit once again ...
See you soon, 'on a green island in the aegean' ...
Posted by Skiathian at 10:30 No comments: